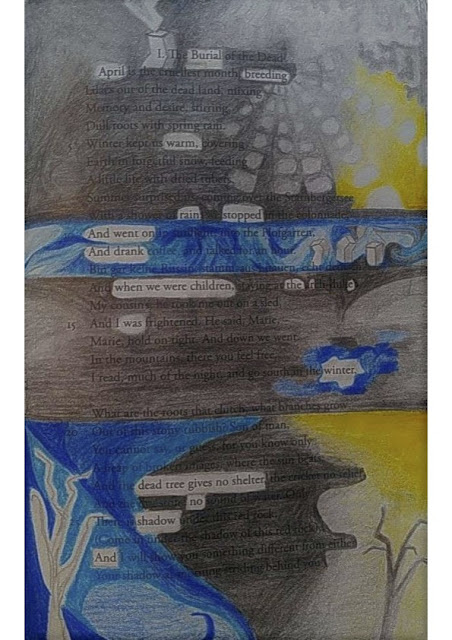 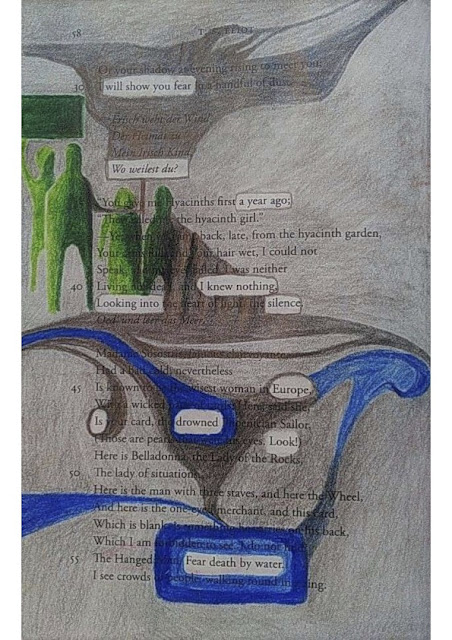 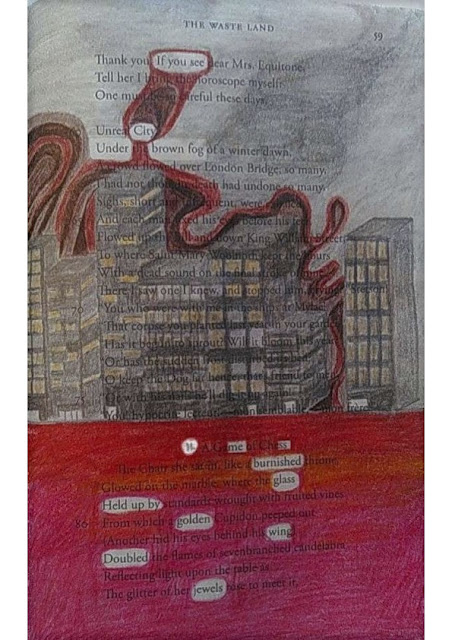 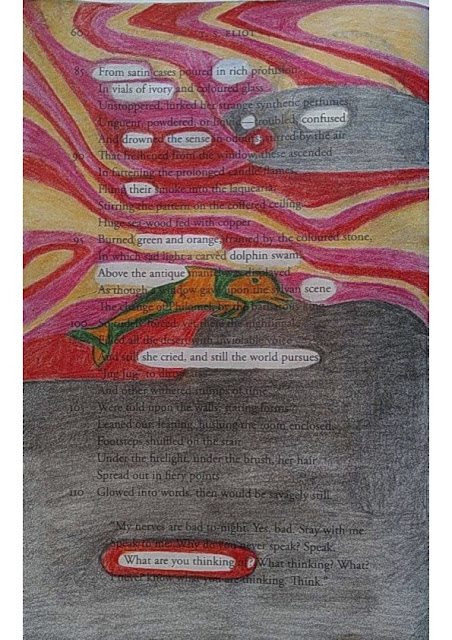 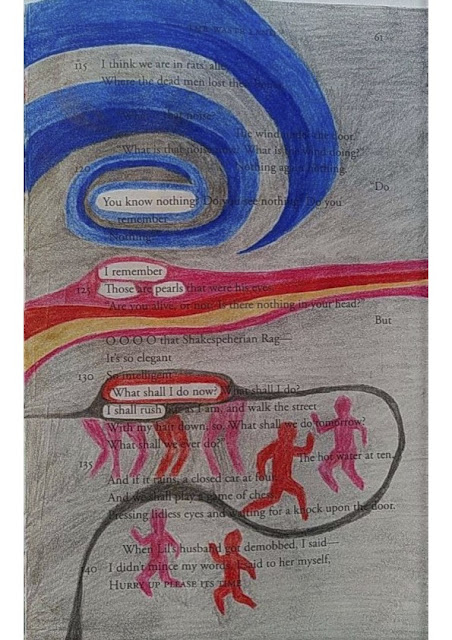 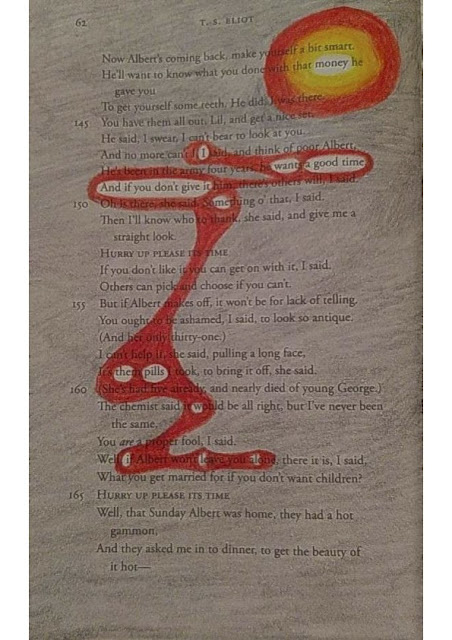 Remember the Republican convention in 2016, where Melania Trump held a speech and raised controversy and a rather scandalous uproar because it was shockingly close to a speech Michelle Obama held prior to that? After a close look it is apparent that Melania copied, paraphrased, and adjusted a great amount of Michelle’s speech, and basically ‘recycled’ her original material. To take this a step further, I was wondering what would happen if Dr. Jill Biden, the current first lady, did the same: holding the speech that was adjusted for Melania, now just adapted to herself. So I did exactly that; I let Dr. Biden recycle an already recycled speech.
um September 30, 2021 Keine Kommentare: 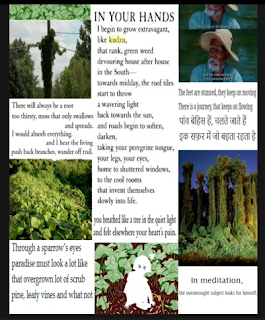 How Dare You by Barbara Hanke and Nora Zeylmans

This short clip shows you how I recycled Robert Frost’s poem ‘The Road Not Taken’ in a way that it hopefully addresses everyone with some kind of message or idea that is relatable. Whenever I read that poem I could really understand what it feels like to stand in front of a crossway and not knowing which way to pick. I decided to create another kind of poem which displays a difficult situation like the one in the poem in a more generalized way. By subdividing the poem’s lines into groups and writing down statements for each sub group that address the viewer or reader I tried to create something new which includes my thoughts but can also be relatable for everyone watching the video. The phrases I came up with might be thoughts all of us have had before. Based on ‘The Road Not Taken’ I wrote down statements that the little devil on your shoulder could whisper in your ear whenever you have to make a decision. They can be some kind of warning or reminder. Also the last statement "You can never have it all" should emphasize that it often helps to accept the decisions we make instead of looking back or being too greedy. However, I think life and the decisions that come with it are hard sometimes but we should not forget to make the best of it and accept that each path we decide to take gives us new opportunities – So don’t forget about the little angel on your other shoulder! 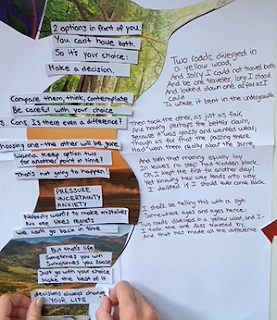 Copyright Disclaimer: Under Section 107 of the Copyright Act 1976, allowance is made for "fair use" for purposes such as criticism, comment, news reporting, teaching, scholarship and research. Fair use is a use permitted by copyright statute that might otherwise be infringing. Non-profit, educational or personal use tips the balance in favor of fair use.

Picture this... like any decent elevator pitch, this main idea fits into a simple line: a jukebox, not unlike a work by visual artist Dustin Yellin, houses Songsville, USA, the town where all the characters from the Great American songbook come to life.

At the heart is a rather simple example: a classic piece of sung Americana, Bruce Springsteen's "Statetrooper" from his 1982 story telling album "Nebraska", which despite his status and MTV'S heyday, never had an actual music video shot. Listening to it, our cultural bias automatically assumes: if The Boss devotes an entire song to a single character, a person wishing he won't have to use the gun on the passanger seat (again) on the statetrooper tailgating him, of course we're dealing with a Caucasian blue collar fella from the Jersey shore. But what if... it's actually one of the gentlemen described in the late Big L's tale of "Casualties of a Dice Game"? Wouldn't you, too, fell Harlem via New Jersey, if you were on the run?

Both are classic pieces of the 20th century storytelling in song, and work swell together when blended from sources widely available on youtube and an audio file recorded with a clip-on microphone while actually driving (that the Talking Heads came on right after worked only too well for the trailer, so we had to leave it in. Eat this, Quentin!), "Lost Highway" on my mind.

"Statetrooper" gained a second round of notoriety when Sopranos' showrunner David Chase utilized it to end the first season of his acclaimed TV program- therefore it was imperative to add in "The New Jersey Turnpike with the classic moment, when the late James Gandolfini's character passes the toll booth of the same name, in itself a possible nod to the brutal slaughter of Mobsters in Francis Ford Coppola's Godfather I. Finally, run through the Final Cut Pro's "Surveillance Camera"-Plugin, and paranoia reaches a new plateau.

All of this ushered in by the aforementioned season finale: While seeking refuge in Artie'S restaurant (which Tony Soprano earlier... well, that's another story), shadows from Joan Jett starting a juke box and her & The Blackhearts' "I Love Rock'n Roll" emerge, ghosts of christmas' past haunting the mobsters' upper echelon along with found youtube footage of the "My 1956 Wurlitzer 2000 Jukebox playing Clyde" variety.

The opening of this bonanza, a clip called "memeculture" (in true spirit of this seminar, a youtube-link filmed off the television screen with a current iPhone) hails from a youtube-rant called "Jonathon tree and Andre Gleeson - A Crypto Christmas Carol", which raises a few interesting points on crypto-currencies (talking about recycling) and its crossovers with the gaming world, which ends in quoting Hideo Kojima's Metal Gear Solig Character Solid Snake over taking more than one hint from Godfrey Reggio's "Koyaanisquatsi".

The Trailer uses an iMovie-Template that comes with any given apple product, mashing up pieces of Curses/DropTheLime-frontman Luca Venezia's very own coverversion of "Statetrooper" - not the first person you'd think of and his promo video in itself quoting David Lynch circa "Wild at Heart" quoting film noir classics. In the word of Big L: "It's flamboyant, y'all". 'Streetstruck


This is the result of a project for a university class dealing with cultural recycling, with copies of art, with taking what‘s there and creating something new of it. In class, we focused on copies, plagiarism, copyright laws and their history and the idea of something individual.

I chose to use a Norwegian teen show as my topic because it was so popular in the Scandinavian countries that it has been copied by several other countries since it’s release, and I try to demonstrate the similarities by both stringing clips together as well as redoing a scene from the original Norwegian version with video material from their copies, showing both similarities as well as differences.

By that I want to show that despite everyone - especially in their teens - striving for individuality, teenage life in the western world ends up being pretty much the same, otherwise the show wouldn‘t have been that popular in such a huge part of the world. At the same time there are little differences that make each version stand out against their counterparts, e.g. the times when a teenage group goes to a party (much later in southern European countries compared to northern Europe), or how they get there (on foot, in the Netherlands partly by bike, or in the US by car), what they drink (beer, champagne or no alcohol at all), how they dress, etc.

The Norwegian original became incredibly successful in a very short time. Not only in Norway or the rest of Scandinavia, but overall the western world and parts of Asia, but ultimately access only from Scandinavian countries was granted due to copyright reasons. The songs used on the show were not licensed for the rest of the world and there was no way to get these licenses with the budget the showrunners had. A perfect example how mainly rich ones benefit from copyright laws.Because of the huge success the TV network then sold the show and made it possible for other countries to make their own versions, usually following the script - and often the overall style and aesthetic of the show - very closely.So far, there are 8 versions of the show with varying amounts of seasons.

For my video I used clips from all eight SKAM-versions, each from several episodes within the first season. Furthermore I used the official trailer for season one, which was the only marketing, the show had pre-running. I also included explanations about the show from several youtubers, because I felt that it was the best way to give a viewer a sense of what was going on. I also included a scene from the Norwegian Gullruten Award Show for Television, Norway’s biggest and most important award show for TV, where the cast of SKAM had an appearance. The video ends with the official SKAM intro music and snippets from the official trailers for all four seasons of the Norwegian SKAM, but in the end I overlaid it with the logo of the British TV show Skins (2007-2013) that dealt with a similar set of teenage problems, a large group of friends and changed the perspective of each episode to one member of the group (in SKAM it is each season that changes perspective), showing that even the original Norwegian SKAM is actually somewhat of a copy. The music ends with the typical tune that the Skins-intro ended with. I also chose Skins as an example because, like SKAM, it had been remade as Skins US for the American market.Most of the music was already in the scenes, but I sometimes enhanced the actual duration of the song in the original in order to show more video material.In a rewind scene where we change from the Norwegian SKAM to SKAM Austin, the American version, I used Edvard Grieg‘s In the Hall of the Mountain King as a background soundtrack - a piece by a Norwegian composer, played by the American Seattle Orchestra. The piece increases its speed as does the video I am showing.

I hope I could show how nothing on TV is ever really new, even a show that is considered as innovative as SKAM is - and that by composing my video of not one new piece. Everything in this video was there before, but that does not mean that I didn‘t do anything. I just reused already existing material and made it my own.

this is a project of